The Legend of Limestone Hill

Once upon a time in Gunung Kidul, Yogyakarta, there was a kingdom named Medang Kingdom. The king was King Dewata Cengkar. He liked to eat. The chef in the palace always worked hard. The king was never satisfied with the food.

One day, the chef accidentally cut his finger and the blood dropped into the food. The chef was really scared and he told his friends not to tell the king about it. His friends agreed.

After the food was served, the king immediately ate. He really enjoyed the food. He said it was the most delicious food he ever had. Then he had a party and invited many people. He wanted his guests to eat his delicious food. However, the food was not as delicious as the king had earlier. The king was angry, he sent the chef to the jail.

Later, the chef’s friends told the king about the chef’s blood in the food. Probably the blood made the food delicious. The king then asked his soldiers to bring him a villager and dropped his blood to the food. It was true! The food was very delicious. Since then the king always asked his soldiers to go around the villages and bring him someone’s blood.

People were scared. They did not want their blood to be taken. They prayed to Gods days and nights. Gods listened to their prayer. They sent Aji Saka. He was a man with great supernatural power.

When he was meditating, he heard a whisper. He was asked to go to Medang Kingdom to help the people. When he arrived at the kingdom, he told the soldiers that he wanted to give his blood. The soldiers later told the king that there was a man who willing to gave his blood.

The king was very happy. He had not eaten delicious food for a long time. That was because his soldiers could not find a villager who was willing to give his blood.

“I will give you my blood, but with one condition. You have to take off my robe,” said Aji Saka.

However when he tried to take off the robe, the king never succeeded. The robe seemed to be very long. The king was very tired. When the king stopped to rest, Aji Saka pushed him. The king fell down. And amazingly the king slowly changed into a white crocodile.

Aji Saka prepared his arrow. He pointed the arrow to the white crocodile. Right after the arrow hit the crocodile’s body, it died instantly.

And on the spot where the crocodile lied down, grew a limestone hill. The hill was infertile. It was very difficult for the villagers to plant a tree there. The villagers then made good use of the hill to decorate their houses.***

Email ThisBlogThis!Share to TwitterShare to FacebookShare to Pinterest
Labels: Yogyakarta

The Legend of Senua Island 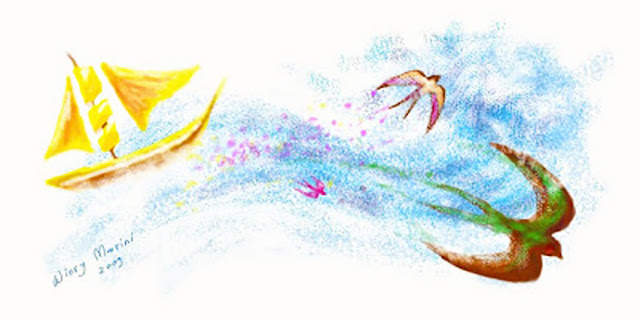 ONCE upon a time, there lived a poor fisherman. His name was Baitusen. His wife's name was Mai Lamah. They lived in Natuna, Riau. They were so poor and they were not satisfied with their lives. They decided to go to another island. They planned to go to Benguran Island. The island was rich with the natural resources. They hoped they lives would be better. They wanted to be rich.

When they arrived in Bunuran Island, they were so happy. The people were very nice. They were kind and helped each other, They also helped Baitusen build his house.

Baitusen and Mai Lamah were also happy to live in Bunguran Island. They were so grateful. The people did not treat them differently although they were new comers on the island. One of the people in Bungutan island was Mak Semah. She was a midwife. He helped pregnant women in childbirth. Besides that, she also helped sick people.
"Remember. Whenever you are not feeling well, do not hesitate to call me," said Mak Semah to Mai Lalmah.

Mai Lamah changed her appearances. She wanted to look like rich woman.

She did not want to look dirty and poor. Sadly, it was not only her appearance that changed. Her attitude also changed. Previously, she was a nice and kind woman. But after she was rich, she became arrogant. She did not want to get along with her neighbors.

In one night, Mah Semah went to Baitusen's house. She wanted to ask for some rice to cook. She was poor. She hoped that Baitusen could help her.

"Please help me. May I have some rice? I'm so hungry and I don't have any money to buy rice," said Mak Semah.

Mai lamah was upset. "What? If you want to have some rice, you have to buy. And if you don't have any money, you have to work. No, I don't want to help you."

"But, I really don't have any money. And I'm too old to work." said Mak Semah.

May Lamah's bad behaviour made the people hate her. However, she did not care. Indeed, she felt very happy when the people did not talk to them. So, they did not disturb her anymore.

Mai Lamah and Baitusen were happy. Mai Lamah was pregnant. They soon would have a baby. And finally it was time for Mai Lamah to deliver her baby.

She was in great pain. Baitusen asked Mak Semah to help his wife. But she refused to help. He asked other neighbors to help, but they also refuse to help.

"Don't worry. Let's go another island. I'm sure the people there will help us," said Baitusen to Mai Lamah.

Then, they were sailing in their ship. It was loaded with their wealth.

Unfortunately, their journey was not in the good condition. There was a great storm. Thunder attacked their ship. they asked for help. But no one helped them. Slowly their ship was sinking.
Mai Lmah's body turned into a big stone. Slowly the stone turned into an island.

People named it Sanua Island. Sanua mean one person with two bodies. Meanwhile her jewelries turned into swallow birds. Until now, Bunguran island is known as home for swallow birds.***

Email ThisBlogThis!Share to TwitterShare to FacebookShare to Pinterest
Labels: Riau 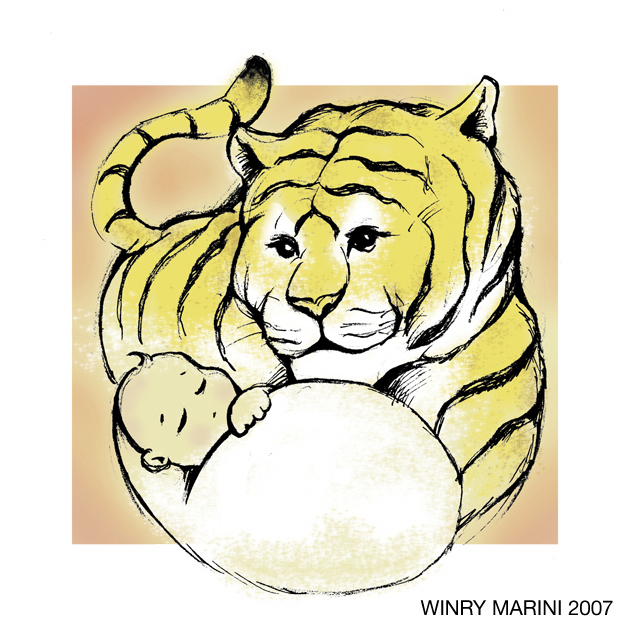